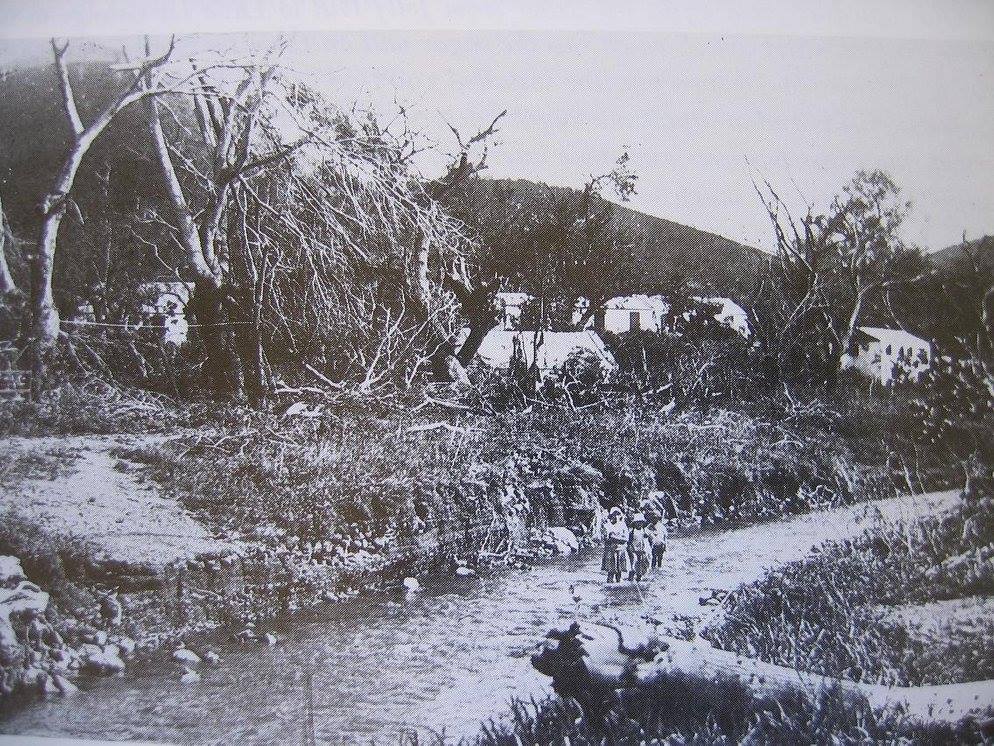 the ruined house we first saw in 2006

a shutter in our 24″ thick fieldstone walls

Little La Grange (or Lagrange) is an estate situated along Mahogany Road about 1 mile from Frederiksted as the crow flies, and 1.3 miles by road. Originally demarcated as West End Quarter #30 and #33, between 1750 and 1776, it is distinct from Lagrange Estate just to the south. It was combined into one estate by Cornelius Hendriksen, a Dutchman, in 1777, and then had eight other owners, mostly Irish, English or American (including two American ladies from 1803 to 1831), with a steam mill for processing sugar cane being built in 1859. (Some of their names survive in the region today – Kortwright, Stevens, Yard, Finlay, O’Reilly, Logan, Moore, Russel, McDonald…) H. McDonald, the owner from 1884 -1895, grew cane and fruit, but went bankrupt, whereupon the estate was sold to Carl Lawaetz of Moltrup, Denmark, who lived in the great-house currently The Lawaetz Museum, across the road. He sold the machinery and bricks from the various mills on the estate and went about converting it into a dairy and beef ranch. He grew some sugar cane but also sold grass to horse owners in Frederiksted, as well as milk, fruit, and rocks (as building material). His three sons, Frits, Kai and Erik, all well-known on the island, (two being authors of books of local history), inherited in 1945, when much of the estate was sold off. 70 acres and the great-house were then run by Kai, who was born here, and who trained in Denmark as a horticulturist. He produced vegetables, salads, herbs, and many extraordinary varieties of mango and other fruits, as well as his own hybrids of hibiscus and other flowers, over a long career assisted by his wife Irene nee Magras, from the island of St Bartélemy (or St Barts). They remained on the estate despite the loss of the museum roof to Hurricane Hugo in 1989, and its replacement, and built a new house overlooking the valley. Sadly Kai had already passed away when Mandy and Merryn moved here, but ‘Miss Irene’ as she is known to all far and wide, has been a great friend and mentor throughout our life here, along with her daughter and family. Her daughter Suzy kindly corrected and rewrote my impressions for this short history. Irene also introduced Mandy to one of her nephews, Jan, also born on St Croix, who has been her partner for eight years, and is the mainstay of the effort to keep equipment running and the garden from returning to jungle!

During all of this period the little estate village which now forms Mahogany Road Chocolate and Nidulari Bakery, was inhabited by many successive waves of agricultural workers, some St Croix born, others from almost every island in the Caribbean, particularly St Kitts, Nevis, St Lucia, and Vieques. I wish I had thought to record every story told to us about those arrivals throughout the 20th Century, there must have been nearly a hundred visitors with tales to tell of this kind, some of whom still return to see us. Many people remember Justo, who lived here all his adult life, alone after his family left, until the last few months of his life – with his scary-to-some eye, his copper skin and long white hair. He was said to disappear into the forest at will, no matter how close to him you passed, and rumours abound of his Taino ancestry and ability with obeah, though he was a kindly person. 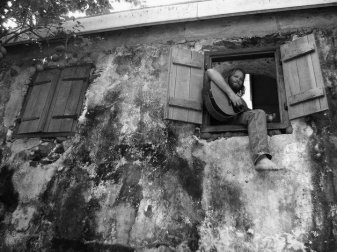 Although conventional farming may not be practical for us as the current owners, the ‘village’ with its cottages, ruins, huge trees, and varied slopes provides a home for us and all our projects – whether artistic, in construction, in the kitchen, or growing things. We are trying to preserve the feel of the place, which cannot be confined to one historical period or purpose, but which has so strongly all the elements of West Indian life. At any given moment you may be able to see the art studio, buy handcrafts from the relief project Mandy runs in Haiti, order a catered dinner, have brunch or lunch, fill your grocery basket with fresh breads and cakes, soups, sauces, desserts, preserves, vegetables and fruit in season, and of course, chocolate, coffee and nuts roasted right here! 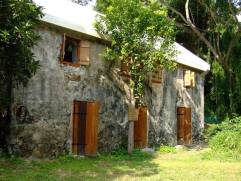 the house, sculpture studio below

the cottage, west of house